Supporting you throughout COVID-19. For guidance and tips on keeping active

Right. Well, I'm Leonard Gardner. I've owned this house since it was built. In 1960 we moved in, and we've been here ever since. About two years ago my wife started having memory problems, and went to the doctor's and he said she had short-term memory. And sometimes it developed into Alzheimer's or dementia but not always. Unfortunately, my wife's has. She now has Alzheimer's. During that time also I was diagnosed with bladder cancer. I was like most people who are told they've got cancer, you break down in tears because you think that's the end. But I don't let it get me down. You've got to get on. I was always taught, if you get knocked down, get up, carry on and have another go. And that's what I have to do.

Because we weren't travelling far on our own to do the usual things we used to do, I needed another outlet to get us outside and to talk to other people. Every Thursday, we used to go to the Batley Community Centre, we'd have our lunch with about 30 or 40 people. And sometimes we have a little bit of music and someone'll get up and do a little bit of a dance. Shirley does that as well, so that helps in the activity thing. We do take picnics. Found somewhere that's far away from people, and I take the tables and chairs in the car boot, and a picnic, and we've picnicked all over the place.

I do a little bit of gardening. I still do the mowing of the lawn and things that I can do that don't tire me out too easily. And at Christmas, I shall be putting some lights up in the trees and making it look like a Christmas garden. The front as well. I love lights in the garden.

I keep at it because it will keep you going and keep your muscles active and that. Because as you get older, you sometimes lose the use of them, and I don't want to get to that stage.

Undefeatable means to me is, you don't give up. I won't be defeated, by anything.

How Len Gets Moving

Len loves his garden – during lockdown, it has been a kind of sanctuary – and he tends to the plants as a way to keep moving around the home. In addition to making sure he’s active, he looks for ways to keep his wife moving, too. Pre-COVID-19, that meant regular visits to the Batley Lunch Club, where the two would chat with others and get up for the occasional dance. Nowadays, they do “lunch club” as a duo, going on walks and taking picnics outdoors.

Here are some resources related to Len’s story about moving more:

Alzheimer's Society - Staying active when you have dementia

Age UK - Being active as you get older 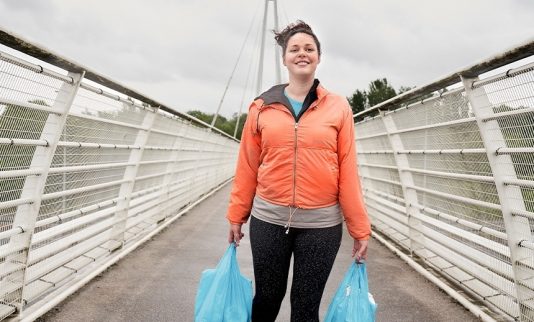 Building activity into your routine

Getting active doesn’t have to involve traditional exercise. Find out more about how you can fit moving more into your routine, as and when you can.

Get inspired
View all activities