Supporting you throughout COVID-19. For guidance and tips on keeping active

For Tony, the biggest benefit of being active isn’t necessarily the physical activity - it’s the social bits and the emotional support. He has found a community through playing walking football, and enjoys playing the game as much as having a chat after. Tony was diagnosed with cancer a few years back, and finding an activity he enjoyed in addition to helping him move more was important to him. Football helps him motivate himself to be as active as he can be, even if some days that just means making it to practice to cheer on the team.

Please note that the stories, experiences, and activities depicted here were all captured prior to COVID-19. To ensure your safety, please follow the latest government ‘Stay At Home’ guidance related to COVID-19 and being active.

Rule 1 is stay alive as long as possible, because you never know what’s around the corner. There are 4 of us who go always together, we make sure we arrive early because there’s a café opposite the ground and we always go in there and have a cup of tea and a bacon roll before play starts. You’ve got to build up your energy before play, so…’ Our group is typically 60s to 70s, we’ve even got some players that are in their 80s, and there’s something wrong with just about all of us [laughs] so. I’ve got a cancer called Hodgkin's lymphoma, which was diagnosed about 2 and a half years ago now. And I have been receiving treatments of various kinds ever since. We play 3 touch, which gets more people involved because obviously the more competent players would otherwise be able to get the ball and dribble it from one end of the pitch to the other and score a goal. That’s not so fun for the people who aren’t so competent or active. I hadn’t kicked a football since I was 13, and so I was, as a number of them told me, rubbish [laughs] when I first started again. But I’ve got a bit better. The physical side of it, keeping fit, is I think just vitally important, because the fitter you are the more able you are to do something about the illness. But the emotional support is just as important. I’d say to anybody who is my age first of all, whether they are ill or not, keep as fit as you can possibly be. The treatment that I am now getting was not available 2 and a half years ago, and it’s only the fact that its available now that means that I am alive now frankly. The fact is that you can live with cancer, that’s the most important lesson, carry on living.

How Tony Gets Moving

Tony plays walking football with a team made of up older players, from their sixties to their eighties. He’s made friends with many members of the team and enjoys their pre-practice meet-ups as much as walking on the pitch. It’s the connections he’s made that motivate him to come back again and again, in addition to the fun he has while playing.

Here are some resources related to Tony’s story about moving more:

Age UK - Being active as you get older 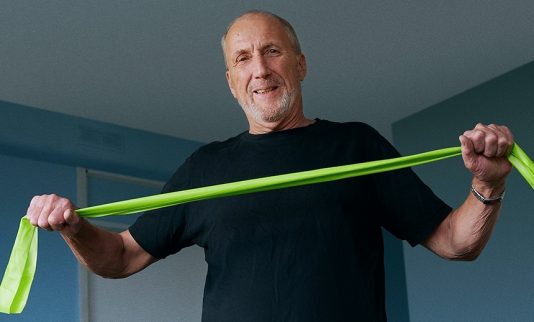 Whether you’re just starting to be active or trying something new, learn more about some things that may be helpful to bear in mind when you’re starting out.

Get inspired
View all activities